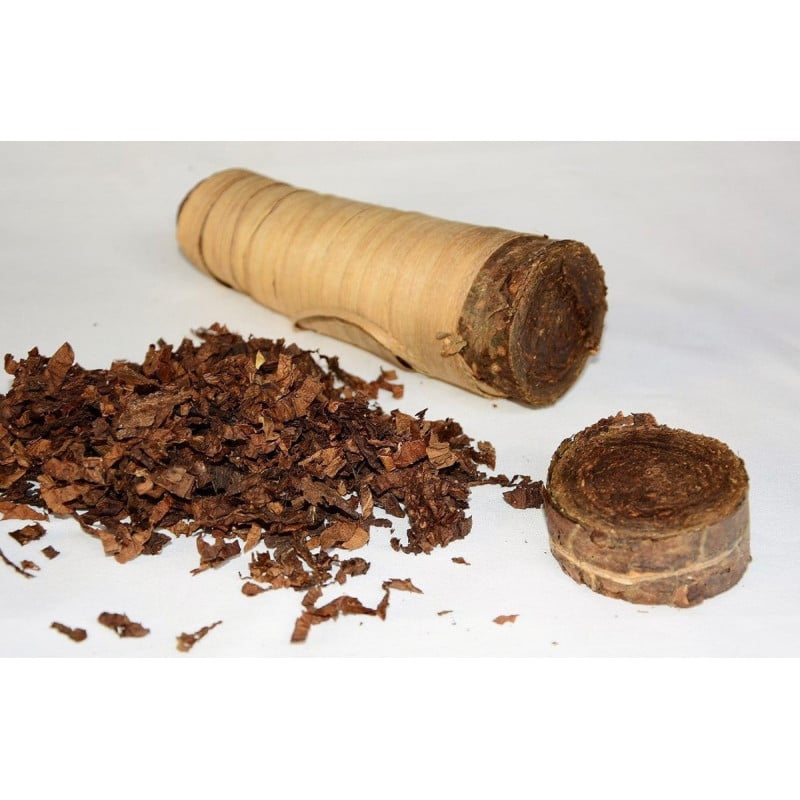 Tobacco can be smoked, inhaled, and also chewed when it’s prepared in a paste made from crushed leaves. We use it with respect and caution, because tobacco is a great traveler. Those who have envisioned him in dreams say that he is a very thin man, almost like a skeleton. He walks in space, aided by a cane where his leaves grow, and he wears a necklace of skulls and knees. They are the bones of our ancestors, so old and ghostly like his white smoke. He looks like he’s tired, but he keeps walking, always carrying for us the memory of all that has happened since the earth and her creation formed.

In dreams we reconnect to Buinaima, the Creator, to Jusíguna, the tree-child, and to Buiñaiño, the mother of water from whom was born all that exists when Buinaima blew and illuminated the water with his white saliva. Since then, Buinaima wears a rainbow in his head of hair and dreams in color, and we also dream, because life is the dream of colors from the creator. We live and we dream in all the colors with which Buiñaiño is dressed when she stands up, holding the heavens to save us from storms and make the sun rise and shine again.

Tobacco holds a unique place among plants.  It was the crop most widely cultivated, used, and traded throughout the Americas.  Tobacco has been found in antiquity from the southern tip of South America all the way to the Northern territories of North America and everywhere in between.

For the indigenous peoples of the Americas, tobacco was considered a sacred plant; for many peoples it was their most sacred plant.  Many creation myths center around the tobacco plant.

Tobacco is a plant in the nightshade family.  There are many varieties of tobacco but today only two are prominently used: Nicotiana tobacum is the species that dominates the tobacco industry and is what most of us think about when we imagine tobacco.  The other, nicotiana rustica (wild tobacco), an heirloom varietal grown almost exclusively in the Amazon, is a much stronger variety.

Nicotiana rustica is an old variety of tobacco that has been cultivated in the Amazon for many thousands of years.  This variety is very potent, often containing up to ten times the amount of nicotine that a standard leaf of nicotiana tobacum may have.  Nicotiana rustica was actually the original tobacco that was planted as far as North America.  But, probably do to its commercialization, nicotiana tobacum eventually became more profitable as its smoother, less harsh quality lent to people being able to smoke more.

The Grandfather [architect of the Universe] sent tobacco to take his place among men.  Smoking, the people talked with God.

Tobacco, or mapacho as it is called in the Amazon, is a sacred medicine of people all throughout the Americas, where it is indigenous to.  It is often said that tobacco is the grandfather plant, from which all other plants sprung forth.  In the Amazon, tobacco has an almost universe appeal as medicine, spanning most indigenous groups.  It is taken in different ways, either smoked, snorted, or drunk.  When smoked it us used as a way to clear energy; both of a space and of a person.  In North America the passing of the pipe is symbolic of this type of use.  When important decisions were to be made, before any man spoke, he and the entire group would first inhale tobacco from the pipe.  In this way it was said that a man would speak from his heart, and he would speak the truth.

Tobacco is also said to help invoke the power of other plant medicines.  The indigenous people speak of other plant ‘spirits’ liking the tobacco spirit.  Anyone who partakes in an Ayahuasca ceremony, for example, usually sees the curandero smoking tobacco and often partakes in the ritual smoking themselves.  The curandero believes that the plant spirits are aided by tobacco.  Tobacco can clear the ceremonial space of energies and allow the curandero to enter a space where healing can occur.  On a scientific level, this could be explained as tobacco contains monoamine oxidase inhibitors which help the dimethyltryptamine in the Ayahuasca brew take effect.  Hence tobacco can literally enhance the experience in an Ayahuasca ceremony.

Tobacco is also ground to a fine powder and taken as a snuff.  This was actually the most common way to take tobacco for a time amongst the newly arrived North Americans and Europeans.  The tobacco can be taken pure or mixed with other plants to produce desired results.  The tobacco is often applied using a long tube where one person blows the tobacco into another’s nostril.  A common name for this snuff is rapé (pronounced ha-peh or ra-peh).  Taken this way, the tobacco has a purging effect on the sinuses, releasing mucous and phlegm, and also tends to ground the recipient, clearing their mind and bringing them more to their center.

The other way tobacco is taken, and by far the most potent, is when it is blended into a tea-like concoction and drunk.  When we speak of tobacco as medicine, as a teacher, and its ability to cure disease, this is the manner where it has the most power.  The drink is an extremely powerful purgative and very effective in cleansing the intestines, the blood, and the body including killing parasites, viruses, and bacteria.  Whats more, on the mental/emotional level, the tobacco has a very grounding and clearing effect.  When people drink they often speak of a great clarity.  Unlike other powerful plants such as Ayahuasca, which often tends to transport people to other states of consciousness, tobacco, taken this way, leaves one feeling extremely present and grounded, with a very strong clarity and insight into the nature of life and oneself.  Blocks can be undone and answers to questions we have had are made simplistically clear.  Partaking in a tobacco ceremony is considered by many indigenous people to be the most powerful way of learning from the plant world.  Tobacco is considered the great teacher and the great healer.  The ceremonies can be quite intense and difficult to endure as tobacco has a very strong effect.  But when completed it leaves the participant grounded, clear, strong, connected to the Earth, and often with great insight into the nature of themselves and the world around them.  Caution must be taken to only work with someone who has experience working in this manner as the effects can be potentially dangerous if not administered correctly.

For better or worse tobacco has become a much maligned plant.  Sadly, when people speak of tobacco what they are often referring to is cigarettes.  Cigarettes are usually made with reconstituted sheet tobacco of very low quality.  The tobacco leaves are often grown with a tremendous amount of pesticides, herbicides, and fertilizers.  Cigarettes also normally contain around 70% tobacco, leaving an additional 30% of fillers and chemicals.  In fact, the standard cigarette has over 600 added chemicals to it.  When combusted, these 600 turn into 4,000.  This doesn’t include the chemicals and bleaches and dyes that are added to the paper and filters.  A little known fact, when filters were first introduced, they were actually made of asbestos!  This melange of chemicals is what a person inhales into their lungs every time they light up a cigarette, often many times per day throughout one’s lifetime.  Many of the chemicals that are contained in cigarettes are know carcinogens, substances know to cause cancer.  Tobacco has been used medicinally for thousands of years, if not many many more.  Its sacred nature and medicinal properties have been used to learn and heal for many peoples throughout time.  Pure, natural tobacco, has never been associated with disease; quite the opposite, it is associated with the sacred, with the divine, with learning and healing.  The chemicals contained in cigarettes are know to cause disease.  And so we must ask ourselves, who is the culprit for disease, 4000 added chemicals, or a plant held sacred by countless people through time immemorial?  The answer, when investigated, and more so when experienced, should become quite clear.